What started in 2010 as emergency fundraising for earthquake devastated Haiti has transitioned into a heartwarming long-term commitment by the Montclair community to play a continuing role in helping to build a future for the young citizens of the poorest nation in the western hemisphere. At the Fourth Annual Concert for Haiti, hosted by the Unitarian Universalist Congregation and Outpost in the Burbs this past Saturday night, a roster of local and international music performers gathered to raise money for the Edeyo Foundation, an independent, nonprofit organization based in New York City, dedicated to improving the future for children in Haiti through education. 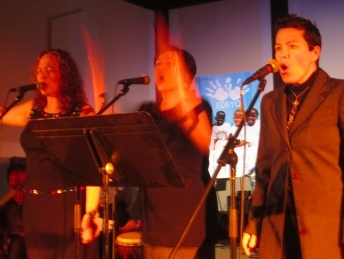 While there was no shortage of home-grown talent — which ranged widely in genre from Montclair-based Haitian reggae bandOxygen Box, who bookended the program, to local high school a cappella performers Passing Notes, the Zydeco sound of Big Mamou, operatic and Broadway music by bass-baritoneStephen Bryant and Thomas Parente and a powerhouse quintet of Jazz House Kids — the concert had two internationally-known headliners, British singer-songwriter James Maddock and Earthman Experience with Jephté Guillaume. Maddock brought an upbeat folk rocker element to the evening (see the video here) and the Shaman-like vocals of Richard “Earthman” Laurent were powerful, especially when he led the audience in a call to prayer for the Haitian children (see the video below). His memorable “Priye” (Haitian Krèyol for “prayer”) summarized the agenda of the concert. “I know the kids in Haiti hear you,” he told the sold-out house, whose ticket price and donations go directly to school children in Belair, Port au Prince. Equally soulful was the performance by Temple Ner Tamid’s Cantor Meredith Grenberg, Leora Perlman, Eva Goldfarb, Rob Maskin and Bob Mellman (above, right). The overall mission, delivered in different voices, musical styles and a range of languages — both spoken and unspoken — was to change the world one child at a time. 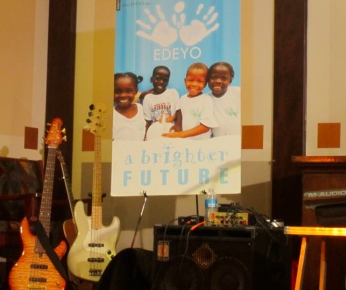 Each year the multi-generational event gets progressively bigger. The concert’s co-founder and organizer, Montclair resident Cindy Stagoff, told Baristanet that Saturday’s concert sold 282 tickets and that there was a line of people waiting to get inside. Sure, the music is a draw, but Stagoff sees the expansion of the annual event as a testament to the positive community energy that exists for this cause. As the Concert for Haiti grows, so does the awareness of Edeyo, thereby allowing the organization to work towards its goals and support partnerships with other organizations also working to help the people of Haiti. In addition to Edeyo, this year’s event was organized to promote the good work of Dr. James Morgan of healthcare NGO Lamp for Haiti and Connor Bohan of Haitian Education & Leadership Program (HELP). Stagoff said that next year, the proceeds will likely be split between the three groups.

“My intention with this concert is to build community and bring concerned people together,” said Stagoff. “The groups can learn from each other and support each other. Every year I receive calls from other groups and individuals who want to support Haiti and I bring them into my “concert community.” 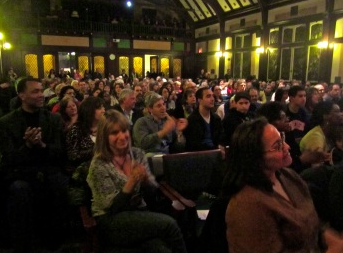 Ultimately, the event may need a bigger venue which would enable the raising of even more funds and establish a wider network for collaboration. Hatian-born Montclair resident Michael Pradieu, Vice President and Co-Founder of Edeyo, points out, for example, that he hopes that Lamps for Haiti will eventually open a medical center to serve the population of Belair. Currently, Dr. Morgan is trying to raise funds to acquire an ambulance for the community. “It’s easier for healthy children to learn,” Pradieu said. In fact, he pointed out that the $18,00 that was raised at last year’s Concert for Haiti paid for a free meal every day for Edeyo students and provided them with medical and dental care.

While the media has since left Haiti and funding for the NGOs has gone dry, Pradieu commended and thanked the Montclair community for continuing to show support and staying the course. “What you do isn’t charity,” Pradieu told the audience Saturday night, sharing success stories of Edeyo students who are beginning to now make their own contributions to society. “It’s an investment. In 20 years, these children will show you that your help was not in vain.”